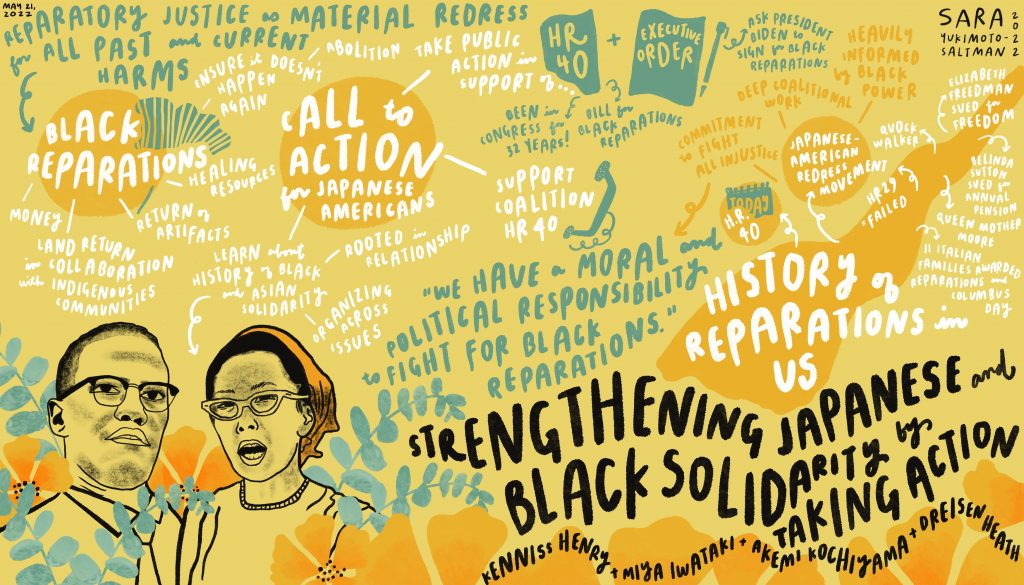 As a coalition, we are building the Japanese American base for the movement for Black reparations. Our hope is to identify and grow relationships with other Nikkei people and organizations who will join the coalition, and engage, organize and bring their communities along in this fight. If you’re interested in getting involved in the NNRC, please reach out to Lisa Doi at ldoi@tsuruforsolidarity.org.

We began the year with a series of events around Black and Japanese American solidarity and action. First, NNRC hosted a virtual event that started with acclaimed jazz musicians/activists Jon Jang and James Newton who spoke about the role of music and culture in building Black and Asian solidarity. Then we moved into a panel discussion featuring Kenniss Henry (N’COBRA), Dreisen Heath (Human Rights Watch), Miya Iwataki (NCRR), and Akemi Kochiyama (Yuri Kochiyama Solidarity Fund).

As it becomes clear that Congress is not going to take action on HR40 this session, we have pushed for President Biden to take executive action to create a Presidential Commission. We ended the year with a letter to President Biden, signed by over 50 Japanese American organizations, urging him to fulfill his campaign promise to create a commission to study the  legacy of enslavement and racist government policies.

2023 marks the 35th anniversary of the Civil Liberties Act being signed into law. One of the things that we, as an intergenerational organization, are aware of is that there is still a lot for our community to learn about the Redress Movement and even continued work to do. The passage of the Civil Liberties Act was significant, but it was not the end of the healing process for Japanese Americans and the work remains unfinished.  As Japanese Americans, there is still more we must do to address the fractures in our community, the racism we have faced, the anti-Blackness we have perpetuated and our intergenerational trauma, that no law alone could have repaired. It is a process of healing, accountability and repair that we must all enter in together.

Facebook
Twitter
LinkedIn
Pinterest
PrevPrevious2022 Healing Circle Convener Committee Highlights
Next2022 with the Police, Prisons, and Detention Working Group: Abolition is messy. Abolition is beautiful. Abolition is for everyone. Next