During the 2020 presidential campaign debates, President Biden stated his remorse regarding the Obama policies that resulted in some of the largest detention sites to date, created expressly for families and children.

After the cruel policies of the Trump administration, we had hoped for better from the Biden administration when they came into office in early 2021, but alas, the past year has resulted in a marked expansion of detention and a willingness of the U.S. government to continue the cruelty and expand policies targeting migrants and asylum seekers, including children.

We are now witnessing an escalation of state violence against immigrant communities masked in a narrative of civility and non-accountability based in blame upon the former administration. Nearly a year into this new administration, we see a lack of meaningful policy change to dismantle racist and cruel immigration policies, an uptick in detention, expedited deportations, expansion of child detention, and a deep commitment to ongoing funding of ICE and CBP.

We are particularly alarmed at the expansion of Emergency Intake Sites (EIS) that has resulted in large scale, warehouse-like prisons for unaccompanied children.

In early 2021, Tsuru for Solidarity (TFS), in partnership with Detention Watch Network (DWN), published a Time magazine Op-ed by Dr. Satsuki Ina, opposing the expansion of detention sites for children. Because these sites have been designated as “temporary”, they fall outside many of the legal safeguards and human rights mandates for unaccompanied children. Tens of thousands of children have been imprisoned in these unlicensed prisons. Whistleblowers have come forward at Fort Bliss with alarming accusations of physical neglect, sexual abuse and severe mental health issues for children. 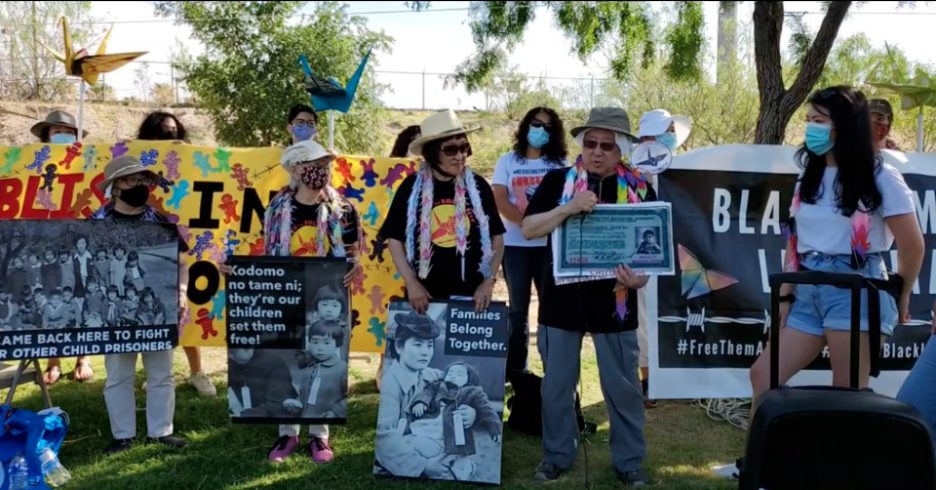 At least two of these Emergency Intake Sites have been set up in former Japanese American confinement sites from World War II.  Others have been proposed at different moments.

In February of 2021 TFS helped establish the National Coalition Against Emergency Intake Sites, composed of national and local organizations fighting to stop the expansion of EIS. Members of the coalition have advocated in the Executive and Congressional branches and led local campaigns to shut down EIS, resulting in closures and slowing of the expansion. But the fight must continue. Thus far we have been denied requested meetings with the Secretary Mayorkas, Department of Homeland Security (DHS) and Secretary Becerra, Department of Human and Health Services (HHS).

TFS helped lead a national education and advocacy campaign in April-May and in July with national partners, brought 40 volunteers to stage a direct action in July at Fort Bliss, demanding closure. During WWII Fort Bliss was an internment camp run by the Department of Justice and held 90 Japanese Americans.

Immigrant children were also imprisoned at Pomona Fairplex in Southern California in 2021. That site, a former Japanese American Assembly Center during WWII,  is not renewing its governmental contract and all of the children have recently been transferred out.

Meanwhile families are still being held by ICE in hotels that are being run under private ICE contracts, a practice that began under the Trump administration.

No assurances have been given that family detention as a program of the U.S. government will end indefinitely. Nor have these detention sites been closed. Until these sites are completely shut down they may be repurposed and weaponized for further harm. Japanese American former incarceration sites are also being recycled in the current day detention system because they conveniently meet all the requirements for large facilities that can be used for mass incarceration.

In early 2022 we will be re-envisioning our direct action work and engaging with partners in a conversation reframing nonviolence and civil disobedience in a time of great violence and a pandemic.

We will be engaged in movement building and training to understand the requirements of fostering internal strength and cultivation to move forward as agents of transformation.

We ask that you join the Direct Action/Arts Action and Family and the Child Detention Working Group in this project. Contact us at tsuruforsolidarity@gmail.com