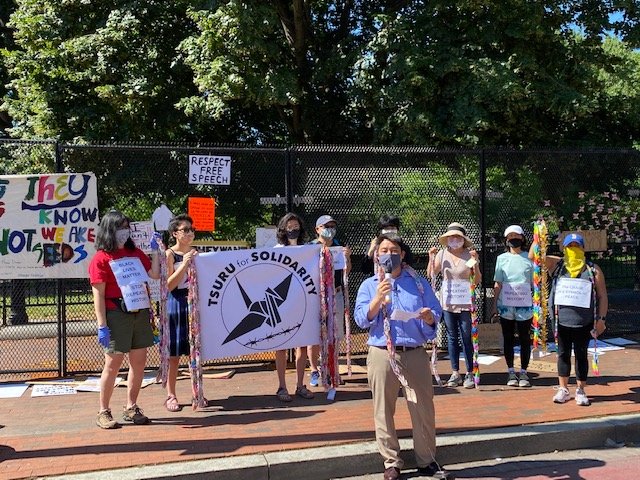 Tsuru for Solidarity DC, Maryland, and Virginia advocates gathered to hang strings of 1,000 cranes on the fence surrounding the White House to protest the continued incarceration of immigrant families and children as a part of the ongoing racism that is endemic to this country. As described in the remarks, that racism has displayed itself most prominently against the Black community in the recent lynching of George Floyd. Hundreds of protestors assembled at Black Lives Matter Plaza joined the Tsuru for Solidarity group as we opened the day of action and assisted with the hanging of the cranes. Here is David Inoue’s speech from that action.

Good morning, I am David Inoue, with the Japanese American Citizens League and member of the steering committee for Tsuru for Solidarity, a national organization of Japanese Americans fighting for social justice, to close our country’s unjust concentration camps holding immigrant children and families because that was what was done to Japanese American families. When we began planning for Tsuru for Solidarity, we envisioned thousands of Japanese Americans coming to Washington to advocate for the closure of immigrant family and children prisons. Then COVID struck and there was no way we were going to bring that many people to one place. So today, a few of us are here in DC adding our voice to the thousands of others calling for justice but there will be others across the country engaging in similar acts throughout the morning in Pennsylvania, New York, Chicago, Seattle, San Francisco, and Los Angeles. You can follow all the actions at tsuruforsolidarity.org.

We stand here in front of the White House because we have someone who claims to be the Law and Order President But what is law and order when immigrant children are locked up in violation of court orders. Or parents must make the choice of giving up their children or accepting indefinite imprisonment to keep their family together. Where is the law and order when we see black men killed by those sworn to protect the law, and to protect and serve us?

We are here today because we have our story of when the law, the Constitution, the courts, our government failed the Japanese American community. During WWII 120,000 people of Japanese ancestry, most US Citizens, and many families with children were taken from their homes, their business, their lives, and sent to prison camps. No proof of a crime, not even suspicion, because our government lied about that. Said we were a threat, but they actually had studies that said we were not.

But our story is not unique in US history, it is part of a continuum. We ended slavery over 150 years ago right? Wrong. We just changed how we enslaved people. And then we brought in more competition. First the Chinese workers, then yes, we Japanese, and today it is workers from Latin America. Or we outsource to countries like China. We get pitted against one another, competing for the scraps. And for some of us, we’ll take those scraps and think, at least I’m not Black. At least it’s not me with the boot on my throat.

Like so many other families, we try to talk about these things at home, but my son gets so upset because he knows how intrinsically evil what is happening to Black people, to immigrant children. We should all be sobbing when we hear of this injustice. Our kids understand we need to be more like them.

And that is where the cranes, the Tsuru come in. They are a symbol of hope. The other part of the Japanese American story is that of apology. A little over 30 years ago, our country offered an apology for what happened during WWII. And that apology came with money. So I am here to say that Japanese Americans got our reparation, why haven’t we done the same for Blacks in this country?

Well, we are here to say that we got our apology, it is time for the Black community to get theirs. Words of apology are not enough when we remain segregated in our housing and our schools. Separate and unequal exists, right here in our nation’s capital of Washington, DC. We need to fight for fair wages when wealth is concentrated amongst the few also the result of years of racist policies from both our government and in our private companies. It is time for us to figure out what full reparations for slavery and years of systematic discrimination should look like. Only then can we have healing as a nation.

We have over 1000 cranes here today. These cranes symbolize hope and healing. The story in Japanese tradition is that if you can fold 1,000 cranes, your wish will come true. Over the past several months Tsuru for Solidarity has folded over 213,000 cranes. Today, we have just over 1000. So as we hang these on the fence, this border wall, let’s send a message to the White House, to all of our nation’s leaders that come here to Washington, DC that we do have hope that we shall overcome and make sure that immigrant children are not separated from their parents, that they are not kept in prisons that their lives matter, and of course that Black Lives Matter.

David Inoue is a longtime resident of the District of Columbia and serves as the Executive Director of the Japanese American Citizens League and on the steering committee of Tsuru for Solidarity. He was joined at the action by his two children.