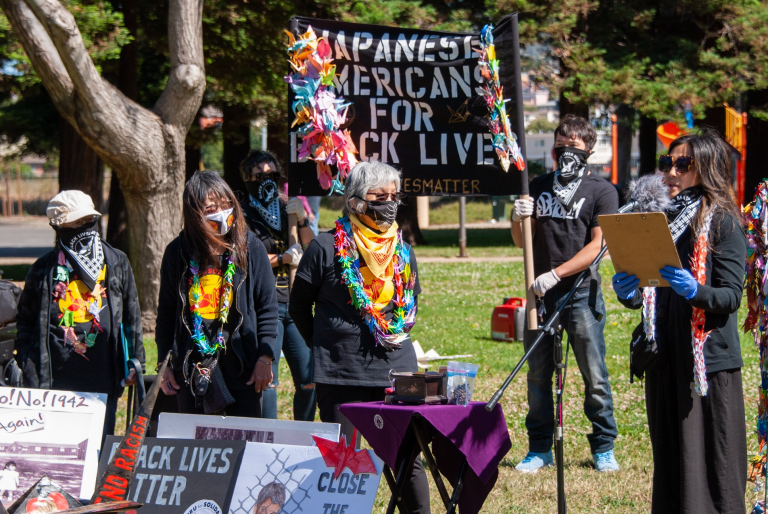 On June 7, 2020 – over one hundred Japanese Americans came together for a Tsuru Rising Vigil at the site of the former Tanforan Assembly Center site where 7,600 Japanese Americans were incarcerated during WWII. The cultural ceremony honored: the spirits of Black people killed by police, immigrants who died in ICE custody due to COVID and JAs who died at Tanforan. The event was a call to action to end state and police violence.

Here is Kim Miyoshi’s speech from that action.

We were born from the tears of internment camp deserts.

And yet here we are.

A testament to their pain.

We stand here in defiance of executive order 9066, of barbed wire, guard towers, of questionnaires designed to break our loyalty – – to each other.

An attempt to divide.

That is what racism does, to stay alive.

I remember on a pilgrimage when a man shared his story. He said, to his father upon being released from camp -, ‘why aren’t you angry or bitter?’

His father, standing in the barracks they would never see again – said, ‘i came to this country with one suitcase. I’m leaving this camp with two.’

With our heads held high.

But what we were holding was more than we could carry inside.

The seeds of shame and pain root  – into each new generation.

Our shared trauma – made it hard to look each other in the eye.

So some of us moved away. To places where Internalized racism hides.

See, we were told we weren’t ‘American’ enough – to not be imprisoned. That our race was the cause – not the racism that caused it.

So we took shelter in and allied ourselves to ‘Whiteness’ thinking that would keep us safe. We were fed a model minority myth to believe basic human rights and dignity – must be earned.

It ripped us from our humanity. Officer Thao.

There are degrees to our Asian-American complicity.

We stand here today in the face of all that tension. All that complexity. In the echo of our ancestors, who looked upon this same sky, and stared out at that san bruno mountain – and prayed for deliverance.

Prayed this would never happen again.

Our act of gathering here today is an act of defiance. It is an homage to the issei, nisei and sansei whose suffering and sacrifice paved the way.

It is an EFF YOU to the racism that didn’t want us to see this day.

But we are here.

We are a people who have been oppressed.

And we are a people who contribute to oppression.

That is our power and privilege.

And responsibility to fight.

This is our moment of reckoning.

We are a country built on 400 years of stolen land, by stolen people, with stolen labor, and stolen lives.

And the dam of our hearts broke open – when George Floyd called out to his mama – right in front of our eyes.

And now we see rage and pain burning in the streets every night.

No WAR on BLACK BODIES!

No more Covid-Dead in ICE.

But we must stay open.

For it is in our history of heart-breaks, we will find the ties that bind.

We must fight – a system of white supremacy EXPRESSED AS anti-blackness and anti-indigeneity – that is the root of the racialized dehumanization we see traverse space and time.

My bachan swept the floor of her barracks every day.

No matter the storm.

One day at a time.

Our hearts beat today as one drumbeat. We dance as one community for all the stolen lives.

We lift our tsuru wings with the names of all those who passed.

And TOGETHER we RISE.