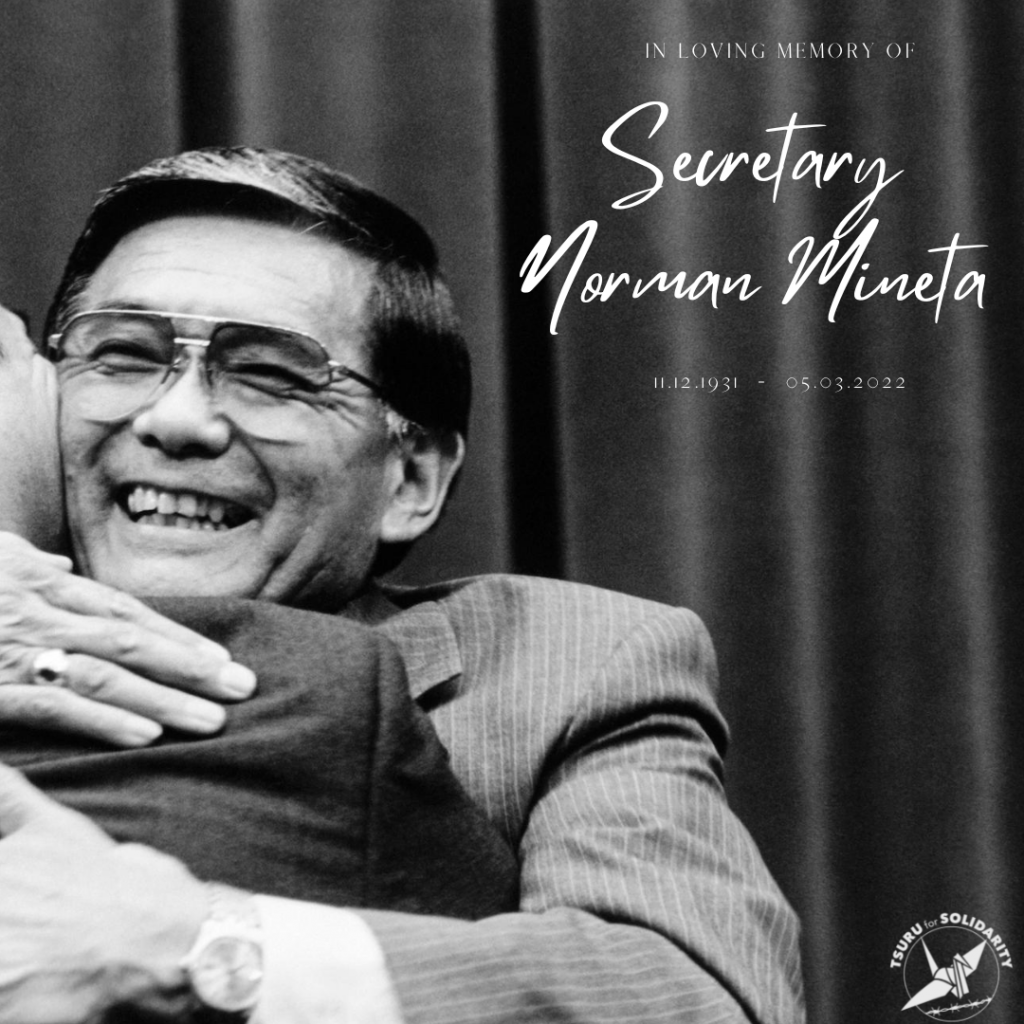 Tsuru for Solidarity is deeply saddened at the passing of Secretary Norman Mineta. Secretary Mineta lived a prolific life of public service, leaving a legacy of leadership as Mayor of San Jose, as a Member of Congress, and as the first Asian American cabinet secretary (he was also the rare politician who served in both a Democratic and Republic administration). As Secretary of Transportation during 9/11, Mineta sought to moderate the President’s actions in a time of widespread racism and hysteria—a time that, as he recognized, had many similarities to the atmosphere that led to our own community’s mass roundup and incarceration. While the Bush administration committed many grave wrongs in the aftermath of 9/11, it could have been even worse without Secretary Mineta’s voice.

Secretary Mineta’s legacy includes his leadership in the Japanese American Redress Movement. As a child who was incarcerated at Heart Mountain, Secretary Mineta understood the legacy of Japanese American incarceration. He was also one of four Nikkei Members of Congress whose collective work, alongside countless community advocates and grassroots organizers, led to the passage of the Civil Liberties Act of 1988. In recent years, Secretary Mineta also threw his support behind HR 40: federal legislation to examine the impacts of slavery and, as the Commission on Wartime Relocation and Internment of Civilians did, make recommendations for how to provide reparations for this grievous wrong. We are grateful for his leadership and his understanding that the harm and loss of businesses, communities, lives, and rights could not be redressed with a simple $20,000, but rather was part of a larger process and conversation of healing for the Japanese American community.

We share our heartfelt condolences with Secretary Mineta’s wife, family, and many friends. At Tsuru for Solidarity, we hope to honor our new ancestor, Secretary Norman Mineta, by continuing his legacy within the redress and reparations movement. It seems fitting that this week we joined with Japanese Americans across the country to co-found the National Nikkei Reparations Coalition. Secretary Mineta, unfortunately, passed away without seeing the passage of HR 40, but we hope that the many remaining survivors of Japanese American incarceration who support reparations for slavery will see that day come in their lifetimes.