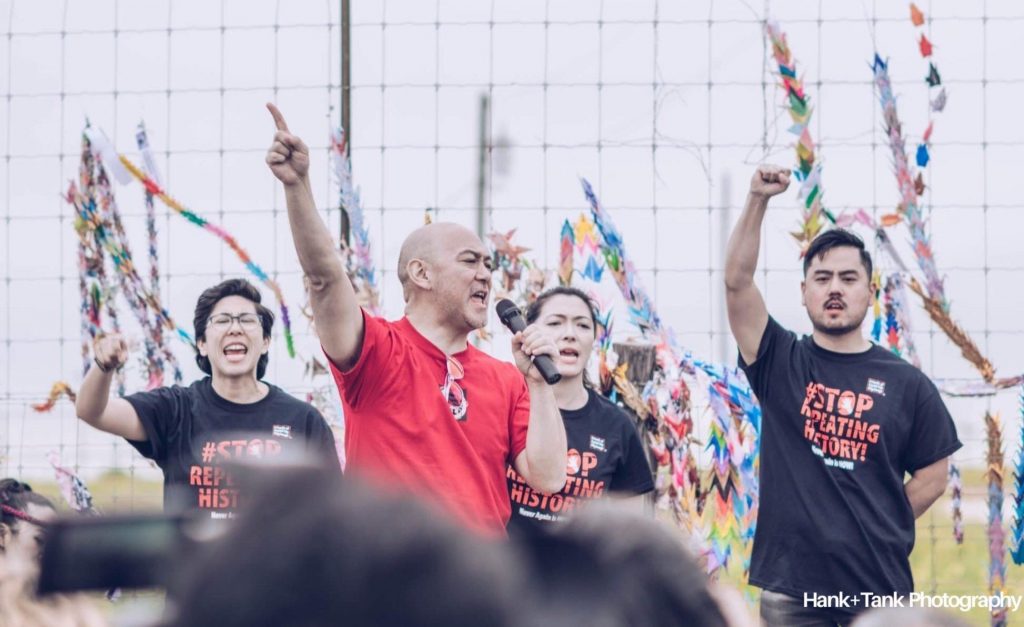 “If you have come here to help me, you are wasting your time. But if you have come because your liberation is bound up with mine, then let us work together.”

Sixteen months ago, Tsuru for Solidarity, a Japanese American social justice movement, held its first direct action at the South Texas Family Residential Center in Dilley, Texas. During that trip a small group of us also traveled to a community center in Laredo, a town on the southern U.S. border. We sat in a circle with young organizers from Laredo Immigrant Alliance and Latinx families recently released from detention. We shared survival stories, and a profound connection emerged among this group of strangers. Thus was born Tsuru for Solidarity’s first Healing Circle for Change.

What we learned on that initial trip to Texas inspired us to continue. The events of the world also required that we engage and step onto the battleground of white supremacy that is targeting all communities of color, including Asians.

In the months following, a passionate and vibrant discourse emerged in the Japanese American community about making ourselves present at detention sights — becoming the allies that the Japanese American community needed during World War II.  In Tsuru for Solidarity, we recognized how embodying that role also had the unforeseen consequence of transforming those who participated in direct actions. Our survivors connected to their moral authority and found voice as they stood up to the government at Fort Sill. Descendants of survivors spoke of a connection to their family histories, something they had been seeking their entire lives. Families began talking openly among themselves about World War II incarceration. We found a way to re-frame the narrative of our history in service and in alignment with other communities who were now being targeted. And in doing so, we were being healed.

We then began discussing the intergenerational trauma caused by the concentration camps — the consequential effects of the wartime incarceration upon our community.  We saw how naming and speaking out against white supremacy that had historically targeted our community gave us a sense of internal freedom and empowerment.  We planned a Pilgrimage to Close the Camps for June 2020 in Washington D.C., which was later replaced, due to the pandemic, by a virtual national protest, Healing Circles for Change,  Kimochi Night of Culture and Celebration, and coordinated direct actions at 7 sites across the country.  Nearly 30,000 people participated over the course of two days.

Coinciding with all of these developments, COVID19 appeared and then the uprisings led by the Movement for Black Lives against anti-Black racism took place, requiring a country-wide reckoning of our history of violence and inequity towards Black people. As a result, conversations began to occur about our own community’s assimilation into white culture and privilege, as a survival strategy, and our own history of anti-Blackness. We discussed how those dynamics have often placed us as a wedge against Black, Brown and Indigenous communities, affording many Japanese Americans middle class status and creating a false narrative of the ‘model minority’, used as a tool of oppression against other people of color.  At what expense did being manipulated in this manner come? What effect did this have upon our identity and our principles? Upon younger Japanese Americans, many of them multiracial and struggling to understand their identity as we continued to assimilate?

In his book, Uprooted Americans: The Japanese Americans and the War Relocation Authority, Dillon Myers, who ran the WRA, wrote:

“The most important result of the WRA program was the relocation of more than 50,000 Japanese all across the United States…This dispersion of the population led to an understanding and acceptance on the part of the great American public that would have never been possible.”

Had Myers also succeeded in setting the conditions and convincing us to erase ourselves in this process of assimilation?

As this discourse was taking shape, camp survivors began speaking out more forcefully and more publicly, sometimes for the first time, on their anger over their own incarceration and at the current attacks on the civil rights of immigrants, Muslims, Indigenous and Black and Brown people.  They were challenging their own assimilation towards white supremacy.

Meanwhile, Tsuru for Solidarity has continued to join in coalition with directly-impacted communities at detention site fights and to build relationships of mutual support and solidarity.  We are creating intentional relationships with other communities of color around collective support, resistance, preservation of culture and history, and struggle against white supremacy. In doing so, new opportunities for healing our fractured community are revealed. We have come to use a term to loosely describe this whole process: Transformative Solidarity.

In all of this work, Japanese Americans are beginning to find a path that allows us to understand and reconcile our history as we reach out in support of other communities.  We are beginning to have important conversations and reflection on our own role in the move towards proximity to white power. We are renewing our resistance to racism and state violence while also exploring and facilitating healing practices that help us to process the intergenerational trauma caused by our community’s experience in the camps.

The movement is just beginning and we welcome you to join us.