David Inoue, Executive Director of JACL spoke at the Immigrant Families are Essential Press Conference on February 3, 2021 at Freedom Plaza, Washington DC. This press conference was organized by many groups and organizations and called on President Biden to 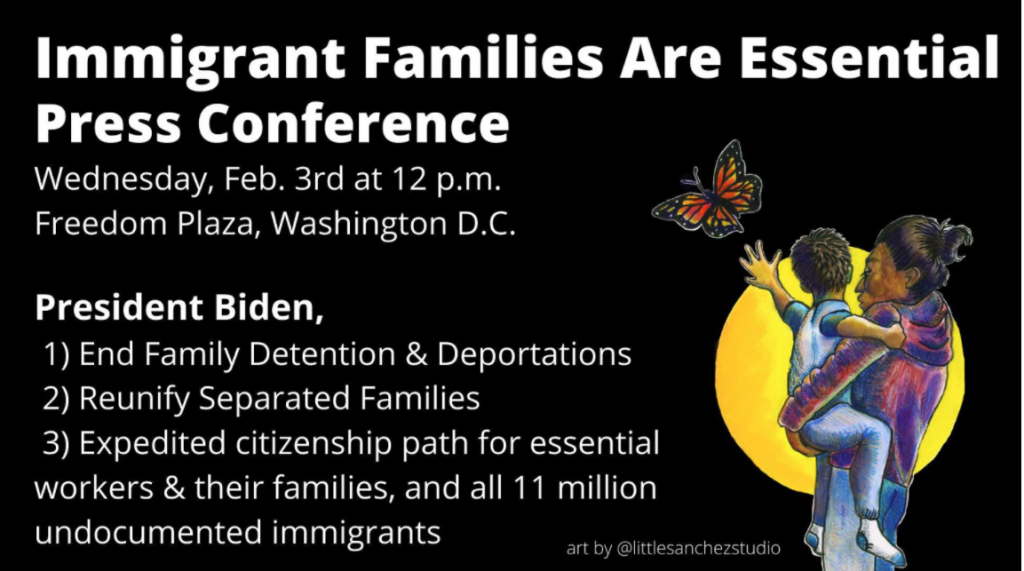 Good afternoon. My name is David Inoue, I am the executive director for the Japanese American Citizens League and today I am here on behalf of Tsuru for Solidarity, a grassroots social justice movement of Japanese Americans and other allies who have sought to end the family detention and child separation policies of our government.

Before I tell you our story, I want to share a quote from Estuardo a 14 year old boy. “I have been jailed here for 13 months together with my mom. I hope that whoever this letter reaches is having a good time and in good health, and that you can help us to leave this place as soon as possible because here there have been too many injustices against us. When I came here they told me that the longest I would be here was 20 days but we have now been here for 13 months without a single good answer… I am a calm and humble boy and I have hope in God that I will have the opportunity to stay in this country because we have suffered a lot in Guatemala. We can’t go back…”

I share this because it could just as easily been written by a 14 year old Japanese American boy during World War II when they might have been among nearly 120,000 people of Japanese ancestry who were forcibly removed from their homes and placed in concentration camps. The reason given at the time was national security. The reality was pure racism. The racism and xenophobia was nothing new, Japanese Americans had already experienced limits on immigration, bans on land ownership or like any other non-white immigrant, the inability to become a US citizen. They were brought here as workers, like the Chinese Americans before them and the slaves before that. Because of the immigration policies that time, targeting Asians like my Chinese grandfather, what we call illegal immigration was common. When we didn’t want Chinese workers, we moved on to Japanese, and now it is workers we bring in from other countries with the promise of a better life, but the reality of exploitation and secondary or even no status.

This policy of destroying families is also one employed for ages against minority families. Slavery was the most brutal exertion of family separation with each family member treated as a separate piece of property to be done with as the owner pleased. Chinese and Japanese men were welcomed as laborers, but women, not so much. And still today, we welcome workers from Latin America, Africa, and Asia, sometimes with a working visa, but also “illegally” to provide cheap and easily exploitable labor. We want them to work here, but we don’t want them to have any rights. Just like Japanese Americans were stripped of our human rights, we deny these rights to today’s immigrant worker and their family.

Estuardo, whose story I shared earlier talks of the moving goalposts, the uncertainty of when his incarceration might end. What was supposed to be 20 days has been over a year. Think about the stress that we as a nation have felt with the uncertainty of COVID. Add to that the uncertainty of indefinite incarceration.For incarcerated Japanese Americans, they would wonder if the incarceration would end with the enrollment of Japanese American soldiers in the war effort? Would the court challenges going to the Supreme Court release them? Or would the war even end the incarceration? Would they permanently be identified as a false security threat? Days stretched to weeks, to months and then years, just as it has for today’s incarcerated immigrant families. The trauma being inflicted upon these children and families is unconscionable and is being compounded with every additional day they are being held. Every child and their family must be released from detention now to stop this escalating trauma.

We are called Tsuru for Solidarity because we have taken the symbol of the origami crane, or tsuru in Japanese. The crane is a symbol of hope and healing and that is what we need to bring for the families who have been detained, and for this nation. As you have heard already, there is a moral imperative that we do what is right and just. The Japanese American and other stories from our history show that we too often have not done what is right, and we know that we continue to do wrong today, but we can change. That is why we say Never again is now.

Our country has the capacity to correct its mistakes. Over 30 years ago our government acknowledged the injustices upon Japanese and Japanese Americans during World War II and offered a formal apology and monetary compensation in an effort to right a wrong. Now we as a nation have committed another injustice to these families, and so many more immigrants with our continued discriminatory immigration policies. We need to do right to these people who have come to our country seeking asylum, or to work in essential jobs, but all in  seeking a better life that is the promise of America.

The new Biden administration has made several strides towards making things right, but there is much to be done. ICE must be brought under control. They are part of our government and must answer to the President’s call for an end to deportations of predominantly black and brown people. All remaining families must be released and the newly announced task force must make short work of reuniting families. We need to stop hiding behind the continued false claims of a security threat. It wasn’t true for Japanese Americans and it isn’t true today, even with the pandemic.

We must also pay for our sins, for what we have done to children like Estuardo and their families. We need comprehensive immigration reform that welcomes immigrants, not hiding them in the shadows under labels like illegal. The least we can do for those we have traumatized or exploited is provide them with the stability of permanent status with a pathway towards citizenship.

This is our hope, as symbolized in these cranes, that our pleas of Never Again is Now will become a call for Freedom and Citizenship Now. That we can become the idealized United States of America that we aspire to be and that these immigrants have come to be a part of. We must share that promise of a better America for all of us.