Home » An Update on our Tsuru Count

To our surprise, the last tsuru newsletter unleashed a flood of emails from around the country which updated us on the number of cranes you folded. Your numbers increased our count, astonishingly, by more than 90,000.

So our current count is …. 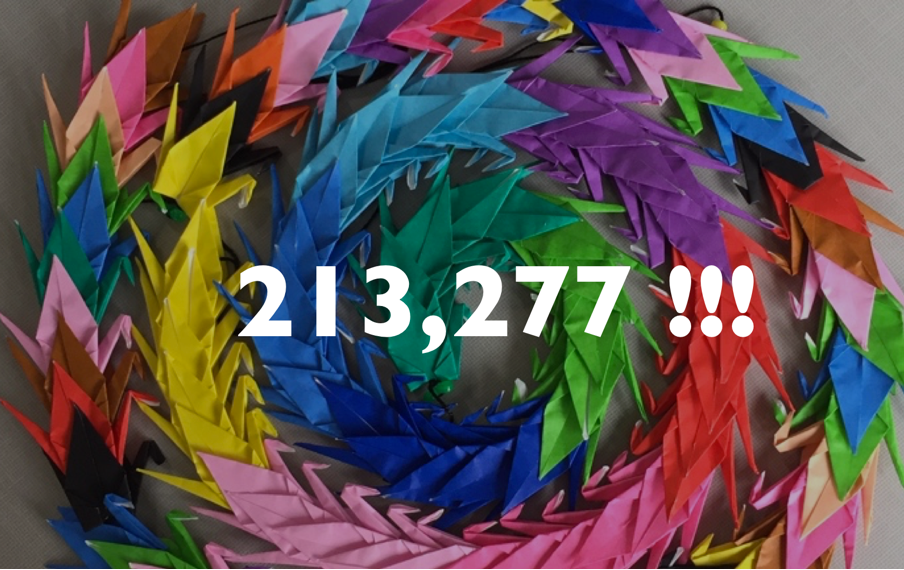 Thank you thank you!  Together, we are a mighty force. We have received cranes (and tsuru counts) from churches, Girl Scouts, Buddhist temples, families, Nisei seniors, an origami class at San Quentin, activist groups, university clubs and many more.

But we’re not done.

Our initial goal was to fold 125,000 cranes, one for each person of Japanese descent who had been incarcerated by the U.S. government during WWII. We wish to continue to fold in remembrance and to show solidarity with detainees who are incarcerated today. The cruel conditions and neglect they have endured are being dangerously worsened by the pandemic.

According to Detention Watch Network, the average daily population of detained immigrants in the U.S. increased from approximately 5,000 in 1994 to nearly 40,000 in 2017.

After 30 years of expansion, the detention system now holds as many as 400,000 immigrants annually.

We have therefore decided to set a new goal of 400,000 additional tsuru — the number of immigrants incarcerated annually — to add to our initial goal of 125,000. That brings our new goal to 525,000 and we are already nearing the halfway point. We hope that you’ll join us as we continue to fold. We wish to show that immigrant children, youths, families and other detainees seeking safety in our country will not be forgotten. Help us stop the indifference.

To celebrate our collective achievement of the initial goal, let’s free our cranes from quarantine and share a photo of them on social media with the hashtag #TsuruRising. Please indicate your location and if you’d like, add your name or organization. You may also send your image to Tsuruforsolidarity@gmail.com. We eagerly await your images of cranes flying to freedom.

We’d like to use some of these photos in a short video to be released on June 5-6, when Tsuru for Solidarity holds a virtual National Protest to Close the Camps — the weekend we had planned to march in Washington, D.C. Join us virtually! Links will be posted on the website www.tsuruforsolidarity.org.

Let’s rise up with our beautiful tsuru and continue to fold with compassion. Sending you wings of health and hope,